This week, I am linking up with Older Mum in a Muddle who is running a project called One Week.  The idea is that you post a photograph and a few words or short(ish) paragraph which capture the spirit of the time of year.  It can be photo of anything that distills and diarises your experience of this week.  Details are here if you would like to join in.

I read somewhere that Battersea Park Zoo in London has a tunnel for the small children to crawl through which brings them right up close to the meerkats in the middle of their enclosure.  I love meerkats, and I know that my little chap does, so we went along to see if the tunnel was large enough for adults to get into too.  Answer, only the very enthusiastic ones! 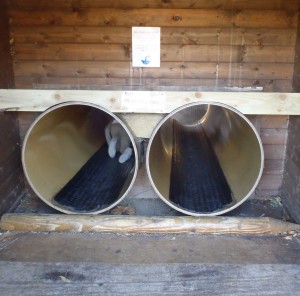 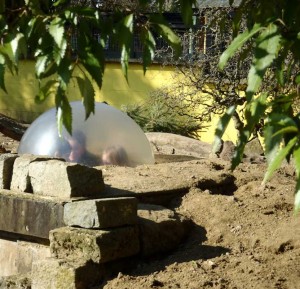 Great meeting place for a few excited children! Speaking of excited creatures, an Emu took exception to my husband taking it’s photo, reached over and, with a sharp peck of it’s beak, had the camera out of my husband’s hand.  Another dad caught the whole thing on video and it caused a lot of merriment amongst the assembled group.  Luckily the camera was on a long loop around my husband’s neck, so he managed to retrieve it without too much bother.  But just look at the expression on this emu’s face. Not happy!

Filed under One Week