Dancing in the Fountain by Karen McCann 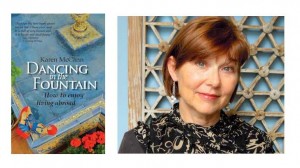 I’ve always been a bit of a nomad.  I calculated the other day that there are only three or four English counties which I have never visited.  I’ve lived all over England, having moved house 21 times and made my home in six different English counties plus London, never living longer than three or four years in any one house.   And that’s how I like it.   Travel, even around one’s own country, shakes up life a little, keeps one sharp and guards against settling too deeply into a routine.  It facilitates contact with many different people and the attendant variations in language and customs.  Even in this relatively small island nation, there is great diversity, and I enjoy discovering that.

So it’s curious that I now find myself living in a place that I would never have chosen for myself and which, seven years ago, was supposed to be temporary.  In an unintended and unplanned way, I’m living in a small, rural village, but harbouring big dreams about one day reacquainting myself with my nomadic ways.  Readers of this blog will know that I am currently studying French with the aim of becoming fluent and eventually living in France.  So it was with interest that I received “Dancing in the Fountain: how to enjoy living abroad” by Karen McCann.  When she sent it to me, the accompanying email informed me that the target audience is women over forty who love to travel.  Check and check again!  So I dived straight in.

I loved this book.  From the very first page the story fizzled with the energy of possibilities being discussed and plans being made.  The book describes how, over a period of five years, Karen McCann and her husband begin to explore Seville, first on holidays from the USA and later for a year, keeping their house in Cleveland, Ohio and renting an apartment in Seville.  As the end of that year draws closer, both realise that they are enjoying their Spanish life so much that they want to extend their visas for another year.  That second year has since turned into a further five, the McCanns downsizing their house in America, extending the lease on their Spanish apartment and obtaining permanent Spanish residency.  The book is all about why they wanted to move in the first place, and the highs and lows, the successes and trials of that process.

The title comes from an incident where Karen and her husband are dancing in the fountain in a plaza square one very hot night.  They started by just dipping in their toes, then standing in the water because it is so cooling and soothing, and eventually dancing in the fountain.  A passer-by, not entirely unkindly I thought, observes that they wouldn’t do that at home.  He was absolutely right, of course, because that’s not what you do in Ohio, apparently.  But Spain lives by different rules and the new social life was, Karen says, much more interesting than the old.  From the festivals and Feria to Botellones (good-natured outdoor drinking parties where many and various alcoholic beverages are shared) the norms and customs are very different from everything they’ve known before.  The book’s sub heading “How to enjoy living abroad” introduces perfectly the feast of information and anecdotes which follow, all of which emphasise how settling in requires one to “mentally unpack their bags”, in other words to accept that life in Spain is very different, and just go with the flow and enjoy.

Two of the most illuminating lessons I took from the book are these: living abroad is easier than you think; and, when making the move, you don’t have to do it lock, stock and barrel.  You can keep the basics of a life in your own country in the form of a house to live in and savings in the bank, something to fall back on.  How much easier this should be for me, living in England, with only a short journey over the Channel to my chosen destination than for Americans facing a 10 hour flight and a nights stopover in London.

My two favourite chapters were Learning the Language and Culture Lag.  Both, in different ways, dealt with managing expectations.  The McCanns began learning Spanish at one of the language schools in Marbella which offered an intensive course.  Unfortunately their fellow pupils were young, mentally agile twenty-somethings with the advantage of already knowing something about European languages.  Additionally, the teachers did not speak English.  Neither of these eventualities had been anticipated and they quickly found themselves struggling.  It was on a day trip to Seville that they found another language school that they were much happier with and so signed up for an intensive course for the following spring.  This school, being much more welcoming and encouraging, did live up to expectations and the language skills learned here were put to good practice in local tapas bars and supermarkets.

Similarly, Culture Lag was also about expectations.  Karen McCann says she found it much more difficult to move between Spanish and American cultures than did her husband.  In America, the early mornings, the reliance on the motor car, the lack of opportunity for a beer at lunchtime without odd looks, the lack of a siesta, all these things she found difficult to adjust to on their return visits to California, where they had made a base.   Driving was a chore which was difficult to adapt to after so many months of travelling everywhere on foot in Seville.   I very much enjoyed this exploration of the differences between the author’s Spanish and Californian-based lives.  It focussed on the different perspectives of people and how these can suddenly bring you up short.  For example, used to paying 8 Euros for a bottle of wine, to buy a glass for $14 seems extraordinary, until friends comment that these prices are reasonable.  I remember coming up against something similar when I moved from the North West to London, where the weekly rents were not much less than the monthly rents where I had been living.  Cappuccinos and lattes were also sometimes twice the price, as were the bottles of wine.  It took a shift in attitude not to be scandalised every time I went out.   Eventually Karen realised that she was trying to live a Spanish life in America, which wasn’t going to work.  She was not mentally unpacking her bags in America and living the reality of where she was.  After this insight, life got easier on their return visits.   As Karen says, there are many layers to a place, most of which will in all likelihood take years to discover; equally true of a new culture or one you no longer live in permanently.   Changes occur, no matter how well you knew a place before.

Karen is asked by her friends and relatives back in America what she does all day.  As she demonstrates in this book, just keeping your balance in a foreign culture can be exhausting.  Trips to the hardware shop to buy a screwdriver can turn into a half day (unsuccessful) endeavour.  Everything takes longer than at home and learning the new language, norms and customs can take up a lot of time and energy.  In fact, I’ve read books on travelling the world which advise against changing cultures too drastically for this very reason – it takes time to acclimatise.  As Karen says, being “constantly surprised, confused, fooled, intrigued and charmed” by her adopted environment means that she stays sharp and interested and is not “sleepwalking through the years on my way to God’s waiting room” or not “sitting around Cleveland, waiting to crumble”.  This book is full of such messages: use it while you can; make the most of it; go out there and discover; take part, observe and learn.

Karen is also asked how long she and her husband will stay in Spain.  As she says at the end of the book, who knows how long we’ll be here!  Who knows indeed, either in Spain or in this life generally.  Whether we choose to stay in our comfortable existences, or go out and explore new ones, who knows how much time we have.  This book was an entertaining read, full of wry observations, dry wit and an acute sense of the ridiculous.  I am now even more certain that one day I want to live abroad.  Even though the McCanns stated at the very beginning of their relationship their mutual intent to travel, it took them 20 years to move out of Cleveland, Ohio.  Maybe there is hope for me yet!

Dancing in the Fountain has been published in paperback format by Café Society Press and is available on Amazon in the UK, Europe and US.  Kindle format to follow in early August and for other e-readers shortly after that.  There is an excellent Reading Group guide at the end of the book.

Look out for an interview with the author, Karen McCann, coming soon.

8 Responses to Dancing in the Fountain by Karen McCann